The Case for Implementing Texas Fire Chiefs Association Best Practices – Part 2 – Change is Hard… So How Can We Use the Theory of Diffusion of Innovation to Help Us Improve?

Yesterday, we started by looking at a model for change that helps us understand our organizational past, where we are in the present and what our preferred future might look like if everything we did went RIGHT. (Click Here for Part 1) The TFCA Best Practices criteria provide a blue print to help us understand what our organizations should resemble when we get to our preferred future but they DO NOT define the performance measures that our organizations must attain or determine the level of service that we must provide. Those are local decisions that are made by the executive staff of the fire department in conjunction with locally elected officials and the municipal executive staff. As we involve more people in the process the more difficult it becomes to change the status quo. The reality is Change is Hard… So how can we use the theory of Diffusion of Innovation to help us improve?

The Theory of Diffusion of Innovation

Four Elements that Influence the Spread of a New Idea

The Innovation – “An idea, practice, or object that is perceived as new by an individual or other unit of adoption.”

The Communication Channels – “The means by which messages get from one individual to another.”

A Social System – “A social system is defined as a set of interrelated units that are engaged in joint problem solving to accomplish a common goal.” 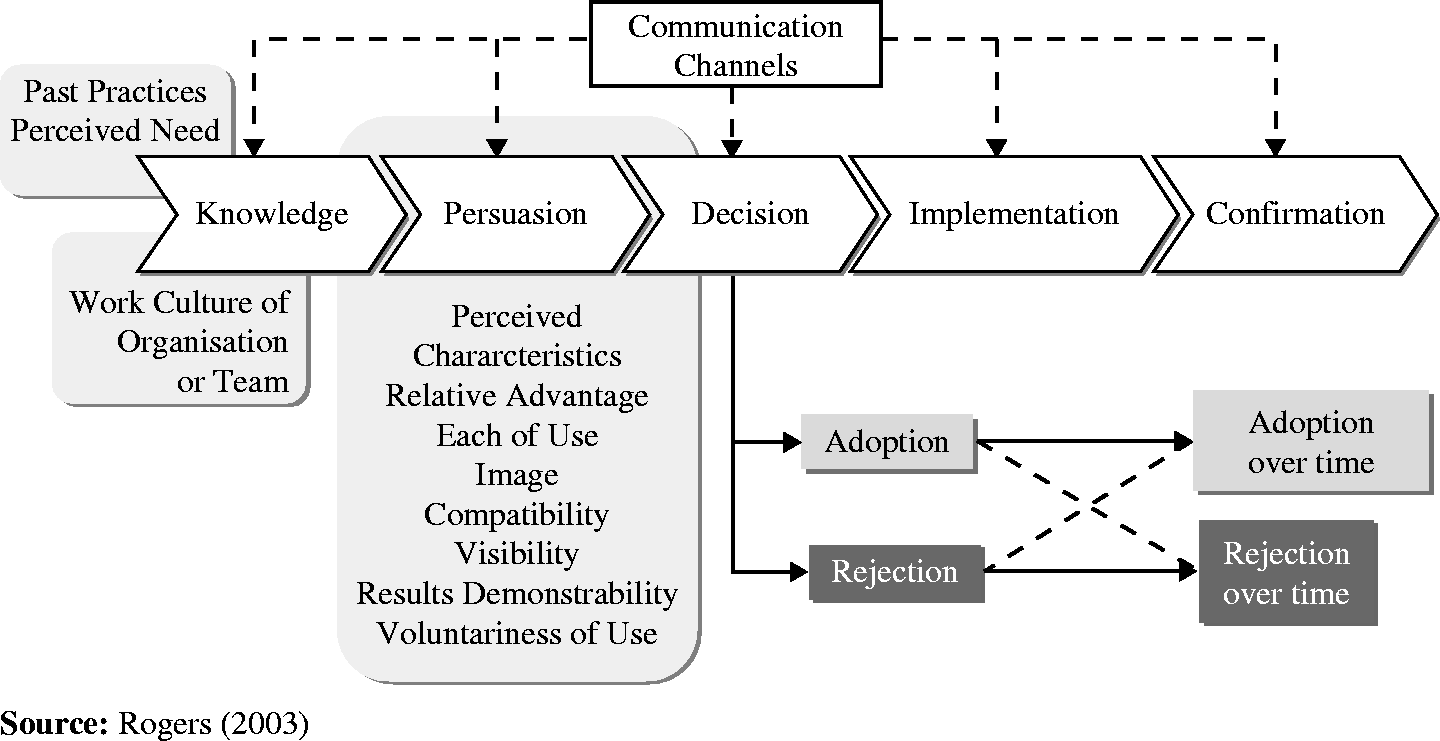 The five stages of the adoption process are:

Knowledge – In this stage the individual is first exposed to an innovation but lacks information about the innovation and is uninspired to seek any more information.

Persuasion – In this stage the individual in interested in the innovation and actively seeks out more information about the innovation.

Innovators – Innovators are the first individuals to adopt an innovation. They are willing to take risks, are typically younger in age, higher in social class, have financial resources, are very social and have close contacts with information sources and regular interaction with other innovators. They exhibit a risk tolerance that allows them to experiment with innovations that may ultimately fail but their financial resources help them absorb these failures.

Early Adopters – This is the second fastest category of individuals who will adopt an innovation. This category carries the highest degree of opinion leadership of any of the other categories. They are typically younger in age, higher in social class, have financial resources, advanced educations and are more social than later adopters. While not as radical as the innovators, early adopters realize their judicious choice of adoption will allow them to maintain a primary voice when communicating with the rest of the social group.

Early Majority – Individuals in this category are considerably slower to adopt innovation than early adopters or innovators. They tend to have above average social status and regular contact with early adopters. The members of the early majority are seldom looked to as opinion leaders.

Late Majority – Individuals in this category approach innovation with a high degree of skepticism and will not adopt an innovation until it has been adopted by a majority of the social group. They typically have below average social status and may have limited financial resources and most of their contacts are members of the early and late majority.

Laggards – Individuals in this category are the last to adopt an innovation. The members of this category typically are advanced in age, have limited financial resources and have an aversion to change-agents. They tend to be focused on “traditions” and only have contact with family and close friends. Members of the Laggard category quit using carbon paper when it was no longer available at the office supply store.

Key Principles in the Diffusion of Innovation

Information can be disseminated and knowledge can be distributed but it’s conversations with peers that spread adoption. Adoption of an innovation involves the management of risk and uncertainty. It involves the assurance that our attempts to change will not result in embarrassment, financial loss or wasted time. To receive that assurance we all turn to people that we know and trust… to people who have successfully adopted the innovation themselves. Referring back to the Five Categories of Adopters, with the exception of the Early Adopters, each group has some contact with the group just ahead of them on the curve. Early Adopters are the exception, they tend to be looking for social advantages and see risks as low because of their financial resources, social standing and advanced knowledge of the innovation.

Critical Mass: The Chasm and The Tipping Point

Here is the magic in the theory of Diffusion of Innovation. You don’t need to reach 100%, or 50%, or even 30 % of the social group to see an innovation take hold and become part of the culture of the social group. Understanding the differences between the Early Adopters and Early Majority is staggering. These two groups DO NOT reference each other. According to Rogers, Early Adopters are “Visionaries” and Early Majority are “Pragmatist.” It is at this 15% mark on the curve where the “Creators” are faced with the “Critics.” In Crossing the Chasm, Geoffrey Moore called this 15% mark “The Chasm” and Malcolm Gladwell defined the other side of The Chasm as “The Tipping Point.”

Early in the process of introducing an innovation the message to Innovators and Early Adopters should be “Be one of the first…” but only to about 16%. Once you have reached 16% penetration you have crossed the tipping point and the message needs to be one of social proof that points to the others that have already tested and are using the innovation. At this point the innovation reaches critical mass and the Early Majority takes it to their Peer Networks and integrates the innovation into the rest of the social group.

At this point in the conversation you should be thinking about how Apple markets their products. Apple is an electronics manufacturer that doesn’t even attempt to sell electronics. Apple sells cool solutions to problems that happen to come in the form of electronic devices. To drive this point home, check out this TED Talk video by Simon Sinek…

The Texas Fire Chiefs Association Best Practices Recognition Program is an innovation in the way the Texas Fire Service is organized and emergency services are delivered. Using the theory of Diffusion of Innovation making the necessary changes is not as overwhelming as it may appear.

The Case for Implementing the Texas Fire Chief’s Association Best Practices – Part 1 – We’ve Never Left One Burning… Why Not Keep Doing What We’ve Been Doing?

The Case for Implementing the Texas Fire Chief’s Association Best Practices – Part 2 – Change is Hard… So How Can We Use the Theory of Diffusion of Innovation to Help Us Improve?

All information contained in this article are solely those of the author and do not reflect the official views of the City of Irving or the Irving Fire Department.